Last Thursday Fred Kent, president of Project for Public Spaces, gave an inspiring lecture in Amsterdam about placemaking: a community-driven, bottom-up approach for improving public spaces. Over the past 37 years, Kent has worked on hundreds of projects, including Bryant Park and Times Square in New York. “We have to turn everything upside down, to get it right side up.”


PPS
Project for Public Spaces (PPS) was founded in 1975 and is a nonprofit planning, design and educational organization dedicated to helping people create and sustain public spaces that build stronger communities. Their approach helps citizens transform their public spaces into vital places that highlight local assets, spur rejuvenation and serve common needs. Kent: “If you plan cities for cars and traffic, you get cars and traffic. If you plan for people and places, you get people and places.” It’s as simple as that.

Street Life
Before founding PPS, Kent studied with cultural anthropologist Margaret Mead and worked with urbanist,  journalist and people-watcher William H. Whyte on the famous Street Life Project. He assisted in observations and film analysis of corporate plazas, urban streets, parks and other open spaces in New York City. The research resulted in the now classic, The Social Life of Small Urban Spaces, published in 1980, which laid out conclusions based on decades of meticulous observation and documentation of human behaviour in the urban environment. A (must-see) fragment of Whyte’s original film can be seen on vimeo.

Placemaking
Effective public spaces are extremely difficult to accomplish, because their complexity is rarely understood. As Whyte said, “It’s hard to design a space that will not attract people. What is remarkable is how often this has been accomplished.” Applying the wisdom of Whyte, but also of Jane Jacobs and others, PPS gradually developed the placemaking-approach for helping communities make better public spaces. Whether they’re parks, plazas, public squares, streets, sidewalks or other outdoor and indoor spaces that have public uses in common. Kent: “Placemaking is turning a [public space] from a place you can’t wait to get through, to one you never want to leave. The placemaking process localizes and is a community process which creates true human empowerment, social and place capital.”
So, placemaking is not the same as constructing a building, designing a plaza, or developing a commercial zone. When people enjoy a place for its special social and physical attributes, and when they are allowed to influence decision-making about that space, then PPS talks about placemaking in action.


Goals
More than just creating better urban design of public spaces, placemaking facilitates creative patterns of activities and connections (cultural, economic, social, ecological) that define a place and support its ongoing evolution. PPS wants to show planners, designers, and engineers how to move beyond their habit of looking at communities through the narrow lens of single-minded goals or rigid professional disciplines. “We have to turn everything upside down, to get it right side up. From a top-down approach, to a community-led approach that focuses on places. So that people can create good places for themselves by discovering their own abilities or identities.”And hopefully get a sense of ownership. Fred Kent in an interview with The Atlantic: “To achieve that, we talk to the people who live, work, and play in a particular space. We ask them questions. We listen to them. We find out what they need and what they aspire to. Then we take that information and create a vision, which can evolve quickly into a strategy for implementing change.”

Key Principles
Placemaking involves the planning, design, management and programming of public spaces. “Design is a small but significant part of placemaking. Managing and programming the space is the most critical […] Ninety percent of success in public spaces is about management. Lots of cities create spaces, but don’t manage them.” This is just one the 11 Principles of Placemaking, which have grown out of PPS’ experiences working with thousands communities around the world. Others are: ‘The Community Is The Expert’, ‘Create a Place, Not a Design’ and ‘You Can See a Lot Just By Observing’. These are all guidelines that can help communities  to start. In his presentation Kent added a few more key-elements, that are hard to criticize: “We have to get from inadequate to extraordinary […] People attract people attract people […] Bring the inside out […] Each place has its own identity  […] Money is never the issue […] We have to evolve from a big government to a facilitative government […] Thinking small in a big way.”


Improving public spaces and the lives of people who use them means finding the patience to take small steps, to truly listen to people, and to see what works best. That’s why one of the key principles says that the process should be something different than a expensive, exclusionary, blanket solution. “The complexity of public spaces is such that you cannot expect to do everything right initially”. The advice is to experiment with short term improvements that can be tested and refined over many years. Elements such as seating, outdoor cafes, public art, striping of crosswalks and pedestrian havens, community gardens and murals are examples of improvements that can be accomplished in a short time and without huge sums of money.

Activities
The common thread (and a sort of eye-opener for me) is that it’s all about creating destinations by adding activities. “Bear in mind that people who are not in the design industries think about a place in terms of what they can do there. […] Great places are about what people do in them, and how they feel, use, and 'own' those places.” Kent gave a great example of a design competition for a bridge in Providence (capital of the state Rhode Island). The community didn’t like the first sketches, partly because it was to iconic. Kent and his team were flown in and after showing some pictures of pedestrian bridges from around the world the question turned from ‘how should the bridge look like?’ to ‘what do you want to happen on the bridge?’. The necessary shift from project-driven and design planning to placemaking. Connecting the planned and lived city. Kent: “So, it’s not about design, but about personality, destinations, activities, connections between people.” He re-enforced his vision by showing some great pictures about places with water elements. “When people take of their shoes, you know you created a great place.” Another possibility to seed a place with activity is food. “Ice cream is something that brings people together. A shared experience and chaotic happiness.”

Power of 10
According to Kent public spaces must become multi-use destinations before they can be sources of civic pride and social connection. This is the so called ‘Power of 10 principle’. In short, the idea is that for a city to flourish, it should contain ten neighbourhoods that each contain ten destinations with each ten places where it is possible to do ten different things. “It’s not about the number ten,” Kent explained, “it’s about creating a critical mass of public spaces. This also speaks powerfully to both local residents and members of a community as well as decision-makers at a municipal level.”

Tools
The great things about PPS is the open source knowledge database. On their website you can find some instruments for the placemaking process. Besides the principles, there is for example a Place Performance Evaluation Game. Starting with a short questionnaire participants get to know each other better and gain new insights into ways to look at their public space. And they can use the Place Diagram (on the right) to evaluate places. The inner ring represents key attributes, the middle ring intangible qualities, and the outer ring measurable data. 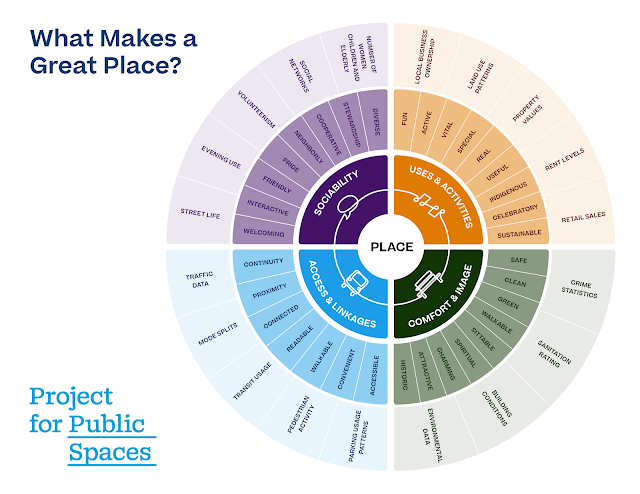 Examples
What become obvious is that Kent is rather skeptical about the planned city in general and iconic architecture and landscape urbanism in particular. In his view too much modern design slurps the life out of cities. In an interview with the Atlantic he gave the following examples: “Take Frank Gehry's Guggenheim Museum Bilbao, which succeeds spectacularly as an iconic structure, but fails miserably as a public space” (see the Hall of Shame on PPS). “Contrast that to Balboa Park in San Diego, which gets 10 million visitors per year without any trendy buildings or fancy design gimmicks. It's just a great park that offers people the activities and amenities they actually want.”

Thursday he showed two locations in Toronto which he visited in 2012. One design-led destination (Sherbourne Common) and a place-(organic)led destination (Dufferin Grove Park). The first one won a national (architectural) award for the building, but has an empty public space because nobody thought about the wishes of the users. The second is a park with a Portuguese bread oven, an amphitheater, an organic playground, campfires, a farmer’s market and lot of community events. With other words: “It features a mix of activities and types of spaces which brings live to it.”
The Lincoln Centre (New York) is another bad example for Kent. “It is design-focused but it is also mostly deserted because it is an elitist place where people do not feel comfortable. Look to all the things you can’t do!” The same applies for the Museumplein (Amsterdam). It’s not a destination: “All you can see is buildings and objects, but what can you do here? It’s so one-dimensional: you only can sit on the grass.”

Positive examples are Dekalb Farmers Market, Bryant Park (both New York), Jackson square (New Orleans), Perth Cultural Centre (Autralia) and the Vondelpark (Amsterdam, the Netherlands). Why these places work? Because these are all places that are carefully managed. There are different possibilities to relax and mostly there are a range of activities and events. With other words: there are a lot of things to do (sitting, picnicking, gaming, strolling, duck-feeding, skating, biking, running, observing, reading, shopping, etcetera).


Contemplation
The lecture was absolutely contagious and inspiring. It’s great to see that their approach is working. The only remark you can make is that a lot of the examples are about public spaces in busy urban centers with (potential) multiple functions. But what about public spaces in residential neighourboods with lower densities and less multi-functional use? Can it also happen there? How do you make a connection between these dwellings, the street, the parking spaces and the public spaces? Without a storefront level it seems to be much harder to accomplish the same result. Kent admitted that this is probably the hardest thing to do. On the other hand, also in these places you can start talking with the community about their wishes and create - in a simple and cheap way - different places to sit, play, read, talk, rest, meet, interact and observe.

There is also a Dutch version of this report at stadslente.blogspot.nl

See also the article 'How to make inviting and attractive public spaces? A top 10.'


References and notes for further reading