Due to their increasing popularity cities are under pressure. To accommodate the influx of people, more and more buildings are being built in higher densities. The challenge is to keep these cities liveble, inclusive and sustainable. In his book Soft City David Sim gives numerous tips and examples for this challenge. He shows that higher densities and quality of life can go hand in hand. It's just a matter of people-friendly architecture and city planning.

In 2010 Jan Gehl - architect and former professor at the Royal Danish Academy of Fine Arts - wrote the most inspiring book about urban planning: Cities for people. A must-read for everyone who want to know how cities work, how you can create urban quality and how to work with a demand-oriented approach. Fortunately, nowadays you see his thinking and working methods in many places around the world. Urban professionals who concentrate on the human dimension (the title of chapter 1 of Cities for people), on senses and the right scale (chapter 2), and on the city at eye level (chapter 4). The 'placemaking' movement for example is a direct consequence or even a copy of his work.

Handbook
Although he himself is unfortunately retired, his office Gehl still exists. The urban research and design consulting firm is engaged in inspiring projects and once in a while a book appears from one of the employees. This year David Sim, partner and creative director, wrote the book Soft City about how to combine quality of life with more dense cities. The required transition and its underlying motives have been described many times and may yet well-known: how can we move from the mono-functional, car-depended, suburban cities to more dense, heterogeneous cities with a mix of functions, mix of building types, enough space for slow traffic, and pleasant living conditions? Creating cities that are better for the climate, for social interaction, and providing enough support for public transport and services. Books like Triumph of the City, Happy City, and Building and Dwelling have the same message but get stuck in essayistic reflection. Soft City is much more of a handbook. On the basis of countless projects and by using a lot of photos this book gives you insight, ideas and inspiration for a dense and diverse built environment at a human scale.

Definition
The soft city is about ease, comfort, and care in everyday life, writes Sim at the begin of his book. It is about embracing reality rather than trying to escape it. It is about people-friendly architecture and urban planning that connects people to one another and to all the aspects of life around them. The author brings it a little more nuanced, but as far as I'm concerned, it also offers a counterweight to the 'smart city'. Instead of looking to new technologies for solving urban issues, we should use simple, small-scale, low-tech, low-cost, human-centered, gentle solutions if we want to enrich the quality of life in our cities.


Building blocks
The book is divided in three - rather independent - parts. The first one is about finding ways to deal with density and diversity in the same place. Summarized into a simple equation: Density x Diversity = Proximity. It's about increasing the likelihood or the possibility of useful things, places and people being closer to each other. To realize this, David Sim recommends a number of architectural principles, specific for building blocks:
To a large extent Sim follows the four generators of diversity from Jane Jacobs (1961): the need for primary mixed uses; the need for small blocks; the need for aged buildings; and the need for concentration. It is also an extension of the theory of 'soft edges' by Jan Gehl (2010) which says that ground-floors should have vertical façade articulation with narrow units, many doors, transparency, wealth of details and a mix of functions. 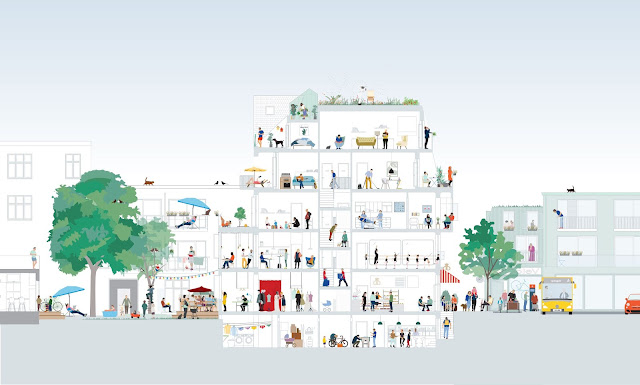 Getting about and getting on
The second part of the book is about the physical and social challenge of people movement. All the small movements around the neighborhood (getting about) are seen as opportunities for socialibility; invitations for people to connect to each other (getting on). On the basis of different measures Sim provides insight how to achieve this human dimension in mobility: through wider, continuous, and obstruction-free sidewalks; sufficient cycle lanes; curb extensions; interactive corners; and central median strips to cross the street (for more inspiration on this subject see the Urban Design Street Guide). With these measures he promotes 'slow traffic': prioritizing pedestrians and cyclist over motorist, just as the ambassadors of 'bicycle urbanism' and 'walkable cities'.

Special attention is given to 'walkable buildings'. A new phenomenon for me. It is a mobility concept that goes all the way into the building, into the stairwell, up the stairs, right up to the apartment door. It's about the final steps that are often forgotten in planning and architecture. While it is precisely these last meters that connect life inside and out. He therefore makes proposals for:
Moreover, like Jane Jacobs, he shows the importance of windows (providing "eyes on the street"), but also of entrance doors on both sides of a building as well as frequent stairwells (providing "arms and legs on the street"). 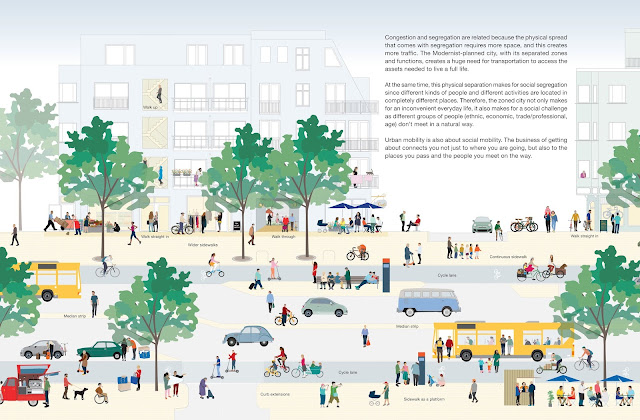 Living with the weather
The third - and least worked out - part of the book is about sustainability and resilience. It is about connecting people to the outside world and specifically nature. For the purpose of social interaction, long-term health and well-being. Sim rightly indicates that not everyone could have their own garden, but that people should have access to a range of outdoor spaces, such as a balcony, public park, roof terrace, sidewalk café, veranda, or window box. He discusses the most simple forms of 'nature inclusive designing': from potted plants at ground level to ivy covering, street plants, fountains and water jets. Here and there he discusses projects related to climate adaptation: "the soft-city approach is about finding simple solutions to moderate the climate, and to reduce the extremes of the weather, so people can comfortably spend more time outdoors." The message is that with the right urban design you can create your own microclimate giving protection to wind and sun (and sound). For example through enclosure, aerodynamic roof shapes, and asymmetrical layout of blocks. A good example of the latter is 'the shaken grid' from architect Klas Tham for a residential development in Malmö (Sweden). Some critical notes
Chapter five of the previously mentioned book 'Cities for people' by Jan Gehl is called 'Life, space, buildings - in that order'. In Soft City the author works on the basis of a reverse prioritization. It's much more about buildings, discussing for example the role of natural light, ventilation, French windows and doors with shutters.

The closed building block with 4-5 stories is the main topic. Despite this is an undervalued form of construction and gives answer to different urban issues, the author puts it too much on a pedestal. Don't get me wrong, his plea is well argued with impressive figures, sketches and photos, but sometimes it is too optimistic. Besides that many countries think differently about comfort (see my argument about modestly sized living in the blog 'Happy city from a Dutch perspective') it is rather idealistic to believe that "different, even conflicting, uses and users can coexist and enjoy the convenience of co-location". And that staircases can "function as social forums". Isn't often the opposite? Different rhythms of life and lifestyles often go hand in hand with discontent, nuisance and neighborly disputes.

Something similar: somewhere the author writes that the different architectures within a building block reflect the need for individual expression, while shared outdoors spaces express the need for community. The question is whether the latter is still true in our strongly individualized world. Unfortunately there is a difference between this dream and reality. I've seen many building blocks that don't create "controllable, private outdoor space", but neglected and polluted courtyards due to a lack of ownership and social cohesion. Regardless of the design.
Finally, I sometimes seem to notice a slight preference for iconic architecture. For example when you look at the presented Spektrum Building in Gothenburg (Sweden) and the massive 8 House on the edge of Copenhagen (Denmark). These are examples that are in some sort of conflict with his own message. Here the human dimension seems hard to find. Although these buildings have an open ground floor, the aesthetics of the whole feels massive, uniform and closed. The principle of small, diverse building blocks - a recurring advice in this book - seems to have received less attention here.

Conclusion
If you're able to look past these small remarks, which is easy, you have a fantastic book. Although the balance is a bit lost, the book covers all the facets of the golden triangle (life, space, building). In addition, to previous work of for example Jan Gehl, there is now also attention for climate change and increasing urbanization: the urban challenges of today. The total package is enriched with numerous international examples from - fortunately - different locations in cities (mostly inner cities predominate). Educational projects from many different firms were selected for inspiration and for supporting the story (and not for promoting his own consultancy firm,  which is mostly the case in books nowadays). In summary you can say that it is a well-written and above all well-designed handbook for city makers who strive for sustainable and inclusive cities with a mix of functions, slow traffic and higher densities.